This map has been in development for a very long time and is now finally
being released to the public. any criticism would be much appreciated.
if you have a older computer it may have a hard time running this map.

This map is filled with custom content. custom made art on the walls.

“GSU Office was probably one of the most challenging maps I’ve made. The entire map was forged from naught – leading to some differences in the general architecture. It never occurred to me just how many different hallways and sections the classic Office map has, but I soon found out. I think 50% of the whole production was recreating the fundamental framework of the level.

Slade and I wanted the map to reach another level, with expansions and differences to the original: For example, I brought back the President’s Office and the side hallway leading to it, from the beta version of the map; and opened out one of the lifts, which players can now traverse down, by ladder, into a warehouse, which leads out into the open area between CT Garage and T Spawn.

The texture set is completely new, as are many props, and some functional elements like the windows – some of which will break in segments, rather than shatter whole; and the stairs, which have been modified slightly.

Our efforts paid off with the release of one of our most ambitious maps, and I’m proud to see the GSU Clan treasure it as they fight their battles in the snowy yards and narrow corridors of my latest Counter-Strike 1.6 level.” 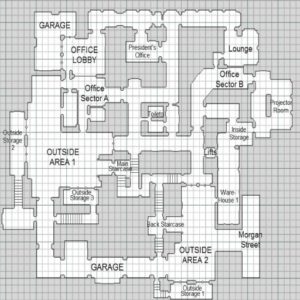